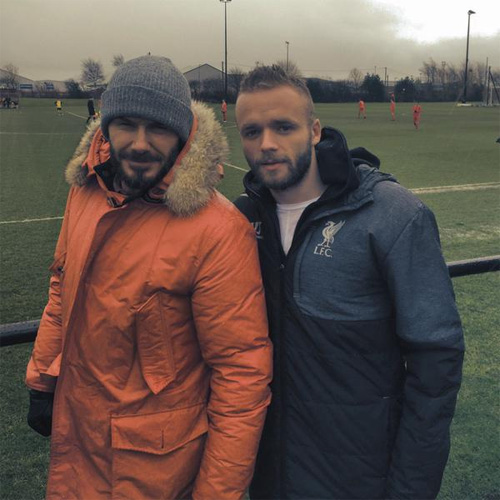 David Beckham is getting around in the football world. After watching Chelsea draw 1-1 with Paris Saint-Germain in the French capital earlier this week, he popped into Liverpool’s training ground on Thursday.

Although the England legend retired from professional football last season, the former Manchester United midfielder has kept his finger on the pulse after he was spotted at Arsenal’s London Colney facility earlier this season.

And La Liga winner Beckham, who previously would have received a frosty reception at Anfield during his United career, posed with Liverpool and Northern Ireland youngster Ryan McLoughlin for a quick snap.

The up-and-coming Liverpool star appeared impressed with Beckham, and even rather ambitiously claimed to bear a slight resemblance to the former midfielder on his Twitter page.

McLaughlin wrote: “With Becks today! What a man #freshguy #twins”

Beckham was certainly prepared for arctic conditions in Merseyside as he donned a snug-looking orange jacket at Melwood.

The ex-LA Galaxy captain could be a special guest at Anfield as Liverpool take on Besiktas in the Europa League on Thursday night.