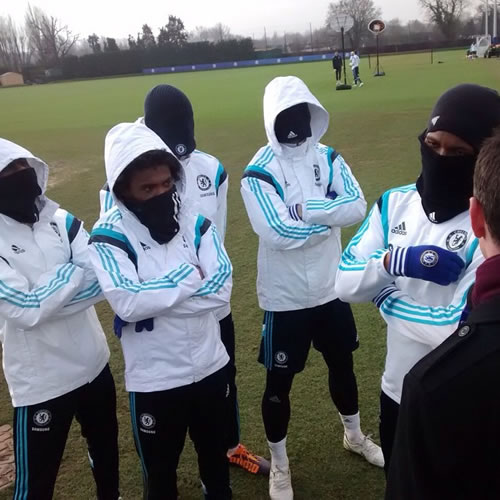 Didier Drogba set his Instagram followers a challenge on Monday by asking them to guess which snood-wearing Chelsea players he had taken a photo with.

The veteran striker was pictured alongside four of his Blues team-mates on the training pitch on Monday afternoon – but with most of their faces covered.

We can see who one of the players is, but the other three members of the “Drog Gang” are proving a lot trickier to identify.

And Drogba was clearly in a playful mood on Monday afternoon as he uploaded the picture above to his Instagram account and wrote: “La DROG GANG!!!!! Guess who are the players here???? #blues #cfc #chelseafc #training #interview #chelseatv #drogGang.”

MORE: Hazard thanks Willian for his assist

Blues boss Jose Mourinho is due to face the media at Chelsea’s Cobham training ground on Tuesday afternoon from around 12:30 GMT.

Three reasons why Tottenham will pip Liverpool to top-four finish