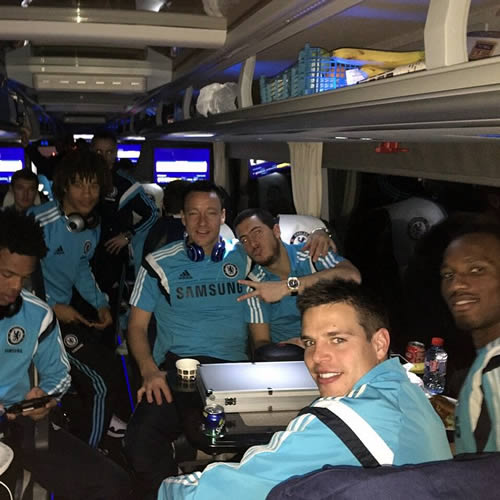 Didier Drogba took to social media on Saturday evening to post a picture of himself and his victorious Chelsea team-mates after their 2-1 win at Aston Villa.

Eden Hazard gave Jose Mourinho’s men the lead in the eighth minute at Villa Park but the home side equalised through Jores Okore’s header at the start of the second half.

However, Chelsea went ahead again shortly after thanks to Branislav Ivanovic’s 66th-minute goal and sealed the three points to extend their lead at the top of the Premier League table to seven points.

And veteran striker Drogba used his Instagram account to salute his team-mates for securing the three points and continuing their bid for the Premier League title.

Drogba shared the photo above on the photo-sharing app and wrote: “Not the best picture but one of the best wins!!!! Come on Chelsea!!!!!!!!!!”

Chelsea, who have won three of their last four games, next face Everton at Stamford Bridge in the Premier League on Wednesday night.