Photo: James Rodriguez catches up with Arsenal and Chelsea stars 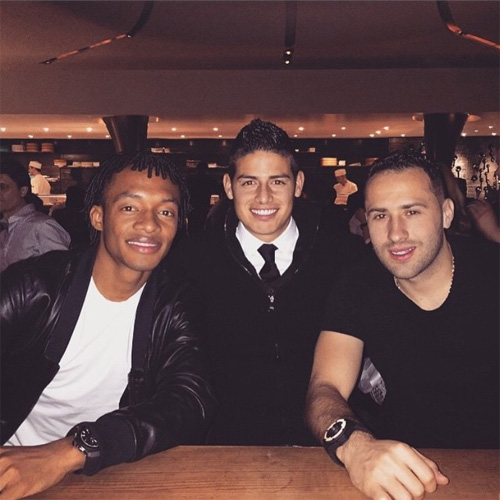 The Real Madrid playmaker caught up with his fellow Colombia internationals for some food in the English capital on Valentine’s Day.

Rodriguez, who joined Madrid in a £50m deal last summer, posted the above photo and wrote: “With my brothers cuadrado @ d_ospina1 we’re together.”

Rodriguez didn’t feature in Real Madrid’s 2-0 victory over Deportivo La Coruna in La Liga on Saturday due to metatarsal injury.

Chelsea midfielder Cuadrado won’t be in action this weekend either, after the Blues suffered a shock 4-2 defeat by Bradford City in the previous round ahead of the forward’s £23.3m deadline-day move earlier this month.

Ospina, meanwhile, is tipped to miss out to Wojciech Szczesny, who is expected to be recalled to the Arsenal side for the visit of Championship leaders Middlesbrough in the FA Cup on Sunday.

The Gunners goalkeeper is relatively new to the Premier League, too, after the 26-year-old moved to The Emirates from Ligue 1 side Nice in a £3m deal last summer.