Photo: Liverpool star Gerrard helps himself to some personalised Nutella

The injured Liverpool midfielder prepares to tuck into some well-deserved comfort food... 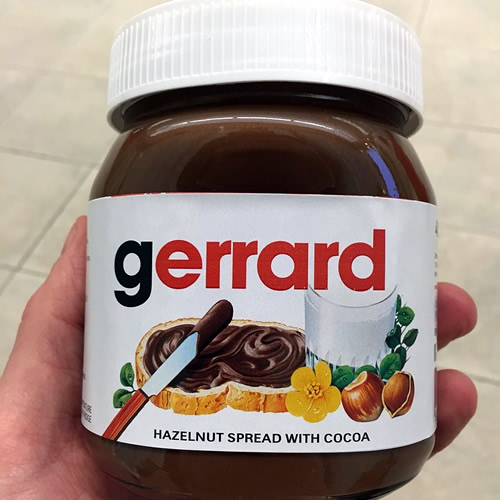 The road to recovery for injured Premier League players can be a testing one.

And it seems that Steven Gerrard is no different, as the Liverpool captain prepared to tuck into some comfort food on Thursday morning.

The veteran midfielder took to social media to reveal that he had been given a tub of personalised Nutella, and that he intended on eating the hazelnut chocolate spread with a spoon.

Gerrard shared the photo above on his Instagram account and wrote: “Time the get the spoon out.”

We’re not too sure what manager Brendan Rodgers would have to say about his choice of snack.

Gerrard is currently sidelined with a hamstring injury he picked up during the 3-2 win over Tottenham Hotspur in the Premier League last week.

The midfielder will miss Thursday’s Europa League clash with Besikas but speaking on Wednesday, Rodgers said that the Reds are assessing the 34-year-old’s condition on a day-by-day basis.

The Reds’ next game is a Premier League trip to Southampton on Sunday afternoon.