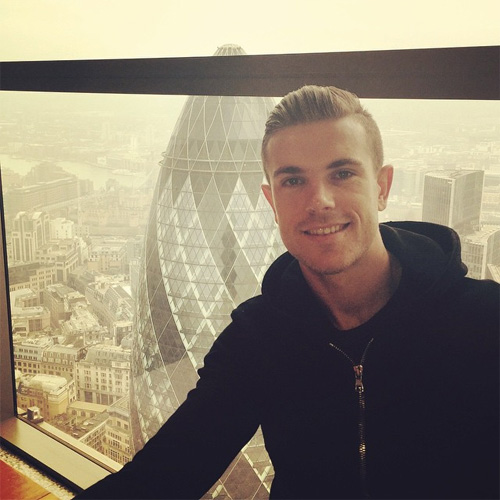 Jordan Henderson treated himself to breakfast at London’s Duck and Waffle after he helped Liverpool book their place in the FA Cup quarter-final draw on Saturday.

The Reds midfielder captained Brendan Rodgers’ men in the absence of Steven Gerrard as the seven-time winners came from behind to win 2-1 at Crystal Palace.

And 24-year-old Henderson enjoyed spectacular views of London’s diverse landscape as he enjoyed a well-earned breakfast treat at the UK’s highest restaurant on the 40th floor of Heron Tower.

Henderson posted the impressive snap above accompanied by the following caption: “Breakfast @duckandwaffle”

It makes a change after Henderson recruited his father to cook a pasta dish after a 2-0 victory over Aston Villa at Villa Park last month.

On Saturday, former Manchester United striker Fraizer Campbell broke the deadlock in the 11th minute in south-east London after Dwight Gayle had caused panic in the Liverpool defence.

The Reds lost 3-1 at Selhurst Park in the Premier League earlier this season, but Daniel Sturridge and Adam Lallana turned the cup tie on its head to seal their progress.