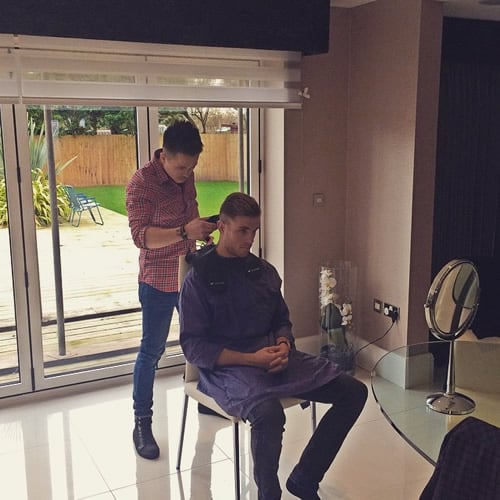 Jordan Henderson took to social media on Friday afternoon to post a picture of his pre-match preparations for Sunday’s clash at Southampton.

The Liverpool midfielder used his Instagram account to share a photo of himself in the middle of a haircut before this weekend’s trip to St Mary’s.

Henderson uploaded the photo above onto the photo sharing app as Brendan Rodgers’ men prepared for their crunch Premier League clash.

The former Sunderland midfielder then used his account to post another snap after the Reds’ training session at Melwood on Friday.

Henderson shared the photo below and wrote: “Training today before we go to Southampton. Another big game for us to look forward to.”

Liverpool vice-captain Henderson has been a key figure in the Reds’ Premier League campaign this season. He has scored two goals and made six assists in 24 Premier League games.

He also featured five times and scored once in the Champions League group stage for the Merseyside outfit, and played the full 90 minutes in the 1-0 win over Besiktas on Thursday night.