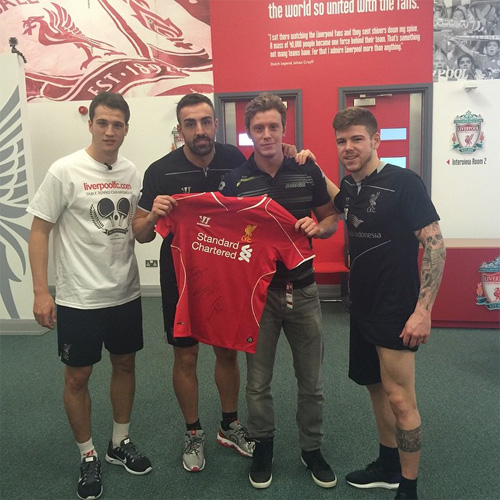 Jose Enrique has regularly boasted of his ping-pong wins over the course of the season, but the Liverpool defender has appeared to have finally met his match.

The 29-year-old full-back came face-to-face with England’s ninth-best ping-pong player on Tuesday, and the Spaniard conceded that he struggled to win a point.

Enrique posted the above photo and wrote: “Yesterday at the training ground with the number 9 in England of ping pong. Really happy to have the chance to play against him. Impossible to make him a point. It is crazy.”

However, the Liverpool left-back can take solace from his No1 ranking at Melwood after having regularly beat compatriots Alberto Moreno and Javi Manquillo since the Spanish pair moved to Anfield last summer.

Perhaps in a bid to restore his dented confidence, Enrique uploaded a video of a warm-up match with Moreno and Manquillo, but the on-loan Atletico Madrid
defender managed to break the ping-pong table.

Enrique wrote: “Fist game yesterday before we start the tournament and the interviews with #LFCTV hasHahahahahaa”

Liverpool make the trip to top-four rivals Southampton in the Premier League on Sunday after having won 2-1 at Crystal Palace in the FA Cup fifth round on Saturday night.