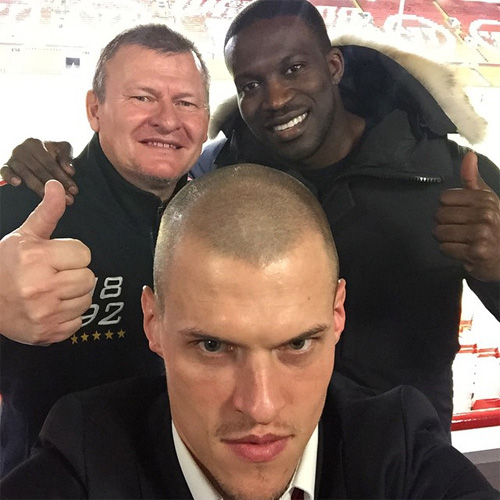 Martin Skrtel is one of Liverpool’s less prolific social-media users, but the Reds centre-half indulged in a post-match selfie with his dad on Thursday night.

The Slovakia international played a key part in Liverpool’s 1-0 victory over Besiktas in the first leg of their Europa League last-32 tie.

The home side avoided any real moments of danger aside from Demba Ba’s first-half attempt, which was well-saved by goalkeeper Simon Mignolet.

So it was no surprise Skrtel sported a broad grin with his father and a mystery friend in a selfie with Anfield as the back drop on Instagram.

Skrtel wrote: “First step has been done tonight!lets finish the job next week at istanbul!!!btw…first selfie with my dad ever”

The Reds were awarded the chance to secure a slender aggregate lead after Jordon Ibe was brought down in front of The Kop with five minutes remaining on Merseyside.

Jordan Henderson was the assigned penalty taker in the absence of injured skipper Gerrard, but Balotelli pinched the ball from the stand-in captain and converted the spot-kick.

Liverpool’s Brendan Rodgers: Jordon Ibe getting better all the time