Steven Gerrard thanks Liverpool supporters for his banner 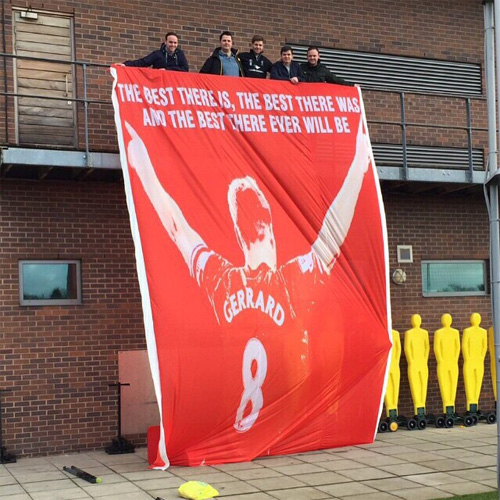 Steven Gerrard is entering his final couple of months as a Liverpool player, the Reds captain is making the most of his remaining time at Anfield.

The 34-year-old midfielder is currently sidelined with a hamstring problem ahead of the Merseyside outfit’s trip to top-four rivals Southampton at St Mary’s on Sunday.

But the Liverpool captain was keeping a close eye on the artwork that will be on display after Gerrard uploaded a photo of a banner made in the Reds talisman’s honour.

Gerrard wrote: “So proud but also flattered by this flag. Thanks to the firm of Liverpool supporters that put in all the effort and time . Here I am with a few of the lads @atwinny Andy, Chris, Kearnsy and Dan #lfc#ynwa#kopites#8”

Reds midfielder Gerrard was injured during Liverpool’s 3-2 victory over Tottenham Hotspur at Anfield earlier this month.

The Liverpool midfielder has scored six goals and has made one assist 22 Premier League appearances this season.

The former England captain is set to join Major League Soccer outfit LA Galaxy at the end of the season, ending a 17-year Liverpool career.

Man United are not a great side, says Arsenal legend Paul Merson