Steven Gerrard relaxes with his wife Alex and daughters Lily-Ella, Lexie and Lourdes 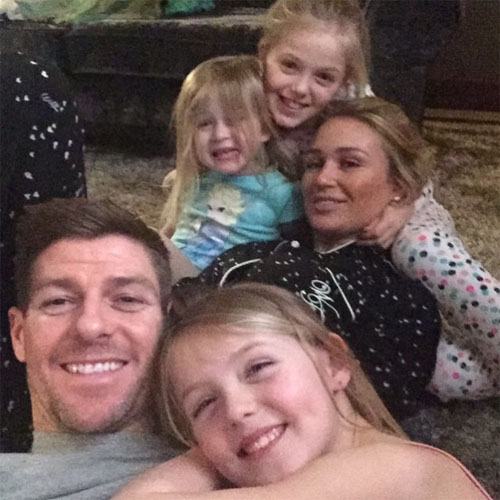 Steven Gerrard may have a fearsome reputation on the pitch, but the Liverpool captain has a softer side away from football sharing a house full of girls.

The 34-year-old talismanic midfielder was forced off in the second half of Liverpool’s 3-2 victory over top-four rivals Tottenham Hotspur at Anfield on Tuesday night due to a tight hamstring concern.

And Gerrard’s wife, Alex, and three daughters, Lily-Ella, Lexie and Lourdes, all helped to take the Red captain’s mind off his latest fitness concern on Wednesday night ahead of their trip to Crystal Palace in the FA Cup on Saturday.

Gerrard posted the above photo and wrote: “Chilling out with my girls”

The Liverpool skipper made his 700th Reds appearance last week as Brendan Rodgers’ side came from behind to beat Bolton Wanderers 2-1 and book their place in the FA Cup fifth round.

Gerrard is set to leave the Merseyside club at the end of the season after a 17-year Anfield career after he agreed a deal with Major League Soccer outfit La Galaxy in January.