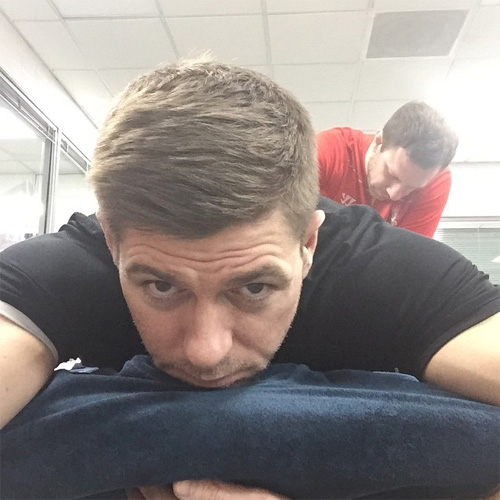 Steven Gerrard is understandably feeling a bit miserable after the Liverpool captain suffered a hamstring strain during their 3-2 victory over Tottenham Hotspur on Tuesday.

The 34-year-old had to be replaced in the second half of the thrilling victory after he complained of a hamstring problem, undergoing scans on the issue on Thursday morning.

Gerrard, who scored a 53rd-minute penalty against Spurs, is expected to miss the Merseyside club’s trip to Crystal Palace on Saturday evening due to the hamstring injury.

But the Liverpool skipper is attempting to stay positive after he posted a motivational message on his Instagram account during a rehab session with one of the club’s physios.

Gerrard wrote: “Rehab day with @chrismorgs10 . The good days only come when you experience the hard ones ..”

Gerrard made his 702nd Liverpool appearance against the north London club at Anfield mid-week, scoring his 183rd Reds goal.

The Reds captain is set to leave his boyhood club at the end of the season after he agreed a deal with Major League Soccer outfit LA Galaxy.

Chelsea’s Juan Cuadrado runs the rule over his Blues debut