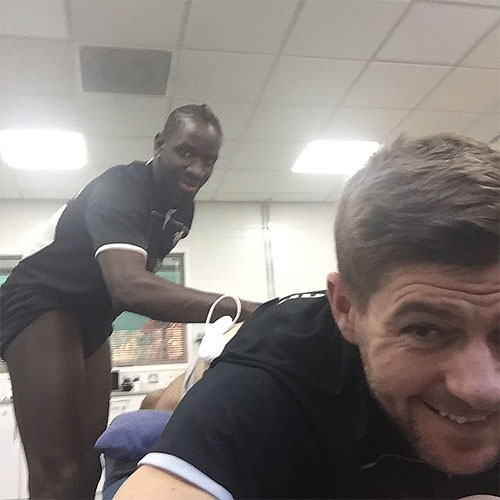 Mamadou Sakho seems to be a man of many talents after the Liverpool defender turned physiotherapist on Tuesday afternoon.

The France international is no stranger to the treatment table after the 25-year-old spent a spell on the sidelines with a thigh injury earlier this season.

The former Paris Saint-Germain defender appeared to have picked up some tips from the Merseyside club’s physios after he treated injured captain Steven Gerrard.

The 34-year-old appeared to be enjoying the impromptu massage session, but then again, would you argue with the muscular 6ft 2ins centre-half? Didn’t think so.

Gerrard posted the above photo and wrote: “Getting some help with my rehab @mamadousakho3 #onedaycloser”

The Liverpool skipper suffered a hamstring strain during the second of their 3-2 victory over Tottenham Hotspur at Anfield earlier this month.

Gerrrard was unable to help the Reds win 2-1 at Crystal Palace in the FA Cup at the weekend, although he will hope to be fit to face Blackburn Rovers in the quarter-final at Anfield on 7 or 8 March.