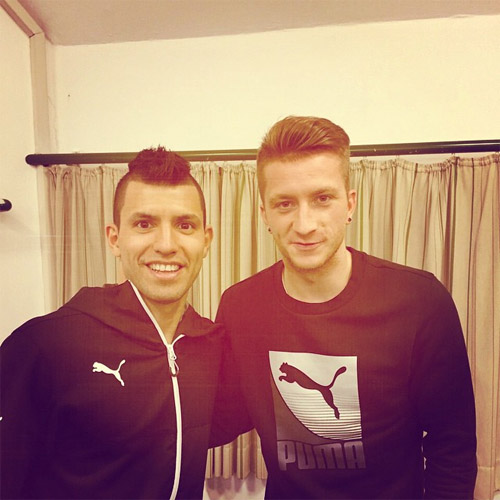 Sergio Aguero snapped a selfie with Arsenal target Marco Reus during a shooting with Puma on Sunday.

The Argentina international didn’t add to his Premier League tally as Manchester City drew 1-1 with league leaders Chelsea at Stamford Bridge on Saturday.

But Aguero has thrived in the Premier League following his big-money switch from Atletico Madrid to The Etihad in 2011, scoring 66 goals in 103 top-flight appearances.

So Arsenal supporters will hope that Aguero inadvertently boosted their chances of signing Reus by talking about the Premier League’s merits with the German forward.

Aguero posted the above photo and wrote the following caption: “With Marco Reus at a @puma Shooting !!”

Reus has been heavily linked with a switch to the Premier League over the past six months after Borussia Dortmund’s horrid start to their Bundesliga campaign.

And the 25-year-old is reportedly ready to snub Chelsea, Liverpool and Manchester United in favour of a move to Arsene Wenger’s Arsenal side in the summer.

Which club do you think Marco Reus will join?

Arsene Wenger: Alexis Sanchez was not close to playing for Arsenal