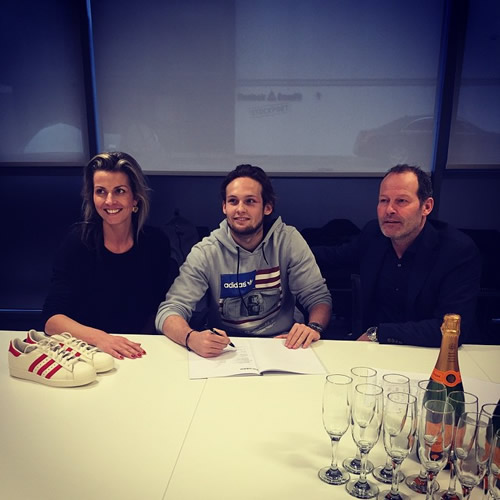 Daley Blind was all smiles as he put pen to paper on a new sponsorship deal with Adidas on Tuesday.

The Manchester United star played the full 90 minutes as the Red Devils came from a goal down to beat Preston North End on Monday night to reach the quarter-finals of the FA Cup.

And the Netherlands international wasted no time in getting down to business on Tuesday as he penned a new contract with the sportswear giant.

Blind posted the picture above, which included a bottle of Champagne ready to be opened, on his Instagram account, and wrote: “Just renewed my partnership with @adidasfootball can’t wait for the future! Thanks @wasserman.nl.”

Blind has been a regular fixture in Manchester United’s first-team since his transfer to Old Trafford from Ajax last summer. He has scored two goals and made one assist in 13 Premier League games for the Red Devils.

United will take on Arsenal at Old Trafford for a place in the FA Cup semi-finals.