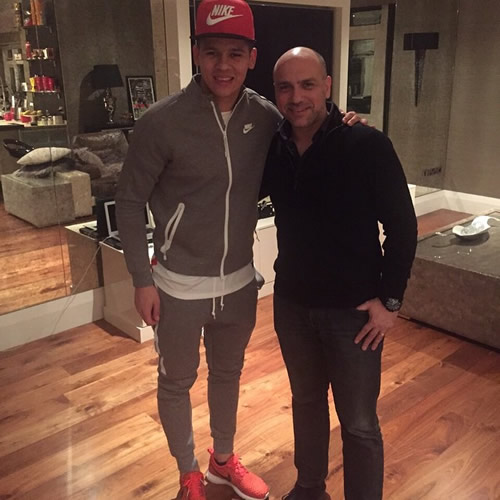 Marcos Rojo was all smiles as he headed out for dinner with his agent on Tuesday night.

The Manchester United defender played the full 90 minutes as Louis van Gaal’s side booked their place in the quarter-finals of the FA Cup with a 3-1 win over Preston North End on Monday.

And the Argentina international looked in good spirits as he posed for a picture with his representative Carlos Goncalves before heading out for a bite to eat.

Rojo posted the picture above on his Instagram account and wrote: “We are going to have dinner with my friend and Agent @carlosgoncalves_proeleven.”

The defender has been a regular fixture in Louis van Gaal’s first-team since his transfer to Old Trafford from Sporting Lisbon last summer.

He has scored one goal in 17 games for the Red Devils this term and spent part of the season on the sidelines with a dislocated shoulder.

Manchester United’s next game is a trip to Swansea City in the Premier League on Saturday afternoon.