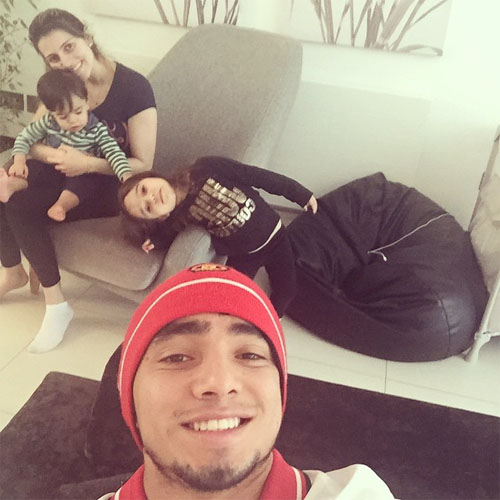 Rafael da Silva couldn’t keep a broad smile off his face on Monday after watching his Manchester United team-mates rescue a 1-1 draw with West Ham yesterday.

The Brazil international is still recovering from a facial injury that he suffered during a 2-0 victory over Yeovil Town in the FA Cup third round last month.

However, Rafael appeared to avoid any long-lasting damage to his face as the right-back took to Instagram to post a chirpy photo with his wife and kids.

Rafael opted to go without a facial mask as he started his recovery from the injury with the club’s Under-21 side last week.

The 24-year-old, who has endured a stop-start campaign, impressed despite the Red Devils losing 2-1 to Fulham.

The South American has made just eight appearances in all competitions under Louis van Gaal this term, racking up a disappointing 588 minutes of competitive action.

Arsene Wenger sure Arsenal will beat Tottenham to top-four finish