Manchester United captain Wayne Rooney has been getting cultural 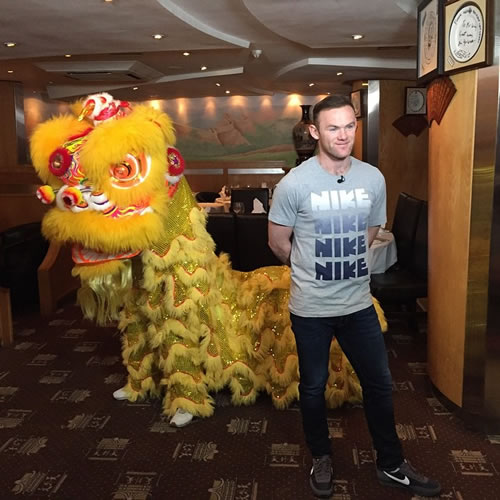 Wayne Rooney took to social media on Tuesday morning to reveal that he has been learning about Chinese New Year.

The Manchester United captain posted a picture of himself at Wing’s restaurant in Manchester in front of a Chinese dragon as part of a promotional campaign.

Rooney, 29, shared the photo above on his Instagram account and wrote: “Had a good day filming yesterday at my friend Wing’s restaurant and learning about Chinese New Year.”

The England captain is gearing up for Manchester United’s Premier League clash with Burnley at Old Trafford on Wednesday night.

Louis van Gaal’s men, who are currently fourth in the Premier League table, were held to a 1-1 draw by West Ham United in their most recent top-flight outing on Sunday.

The Red Devils then face Preston North End in the fifth round of the FA Cup next Monday.

Rooney has been a regular fixture in Van Gaal’s first-team, scoring eight goals and making four assists in 20 Premier League games for the Red Devils this term.