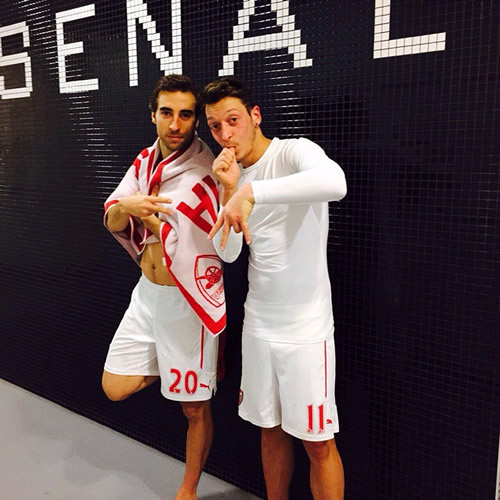 Mesut Ozil dedicated his goal to his niece Mira after helping to fire Arsenal to an emphatic 5-0 victory over Aston Villa at Emirates Stadium on Sunday.

The Germany playmaker was named man of the match as the Gunners thrashed Paul Lambert’s men to record their biggest win in more than two years.

The 26-year-old, who also scored against Brighton and Hove Albion last weekend, was quick to take to social media after the final whistle and dedicate his strike to his niece.

World Cup winner Ozil posted the picture above of himself with midfielder Mathieu Flamini and wrote: “What a perfect day! Perfect like you, little Mira! This goal is for you! #family #niece #love #AFCvAVFC”

Arsenal’s next game is the north London derby showdown with local rivals Tottenham at White Hart Lane on Saturday.

The Gunners are currently 11 points behind Premier League leaders Chelsea.