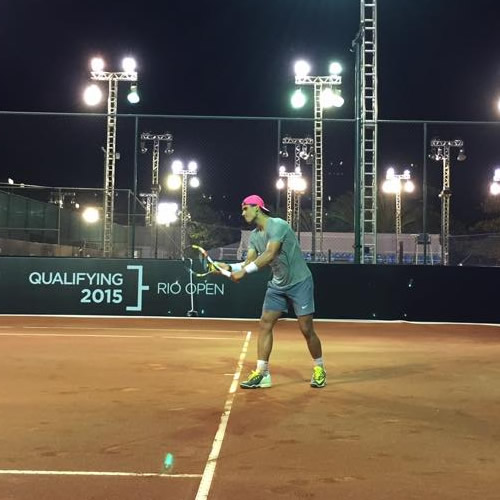 Rafael Nadal has taken to social media to post a picture of himself practising at night ahead of the Rio Open in Brazil.

The Spaniard is set to start his clay-court season next week in Rio as he returns to action for the first time since last month’s Australian Open.

Temperatures in Rio topped 38C (100F) on Friday, with similar conditions predicted for next week during the tournament.

So the 28-year-old wisely opted to conclude his final pre-tournament preparations by practising at night-time.

Nadal posted the picture above on his Facebook page and wrote: “The heat isn’t too suffocating at night.”

Speaking ahead of the tournament, Nadal said: “I think this heat would affect anybody

“It’s very difficult with these conditions. The conditions are extreme, with high humidity on top of that. If it doesn’t cool off, I’ll suffer and try to survive any way I can.”

Meanwhile, Nadal also admitted his surprise that the Rio Olympics tournament will be played on hard court and not clay.

“I am surprised that in a country which has clay specialists the Olympics are going to be on hard court,” he added.