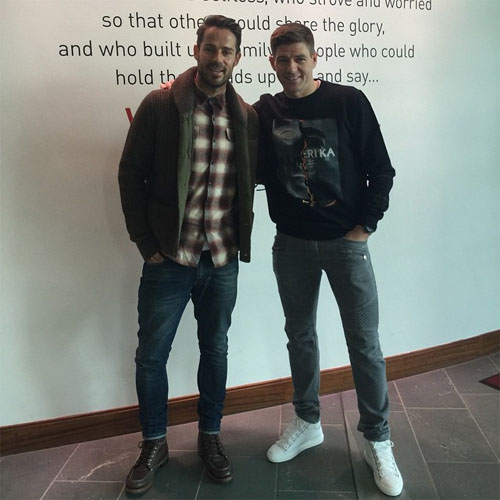 Steven Gerrard says he learnt so much from Jamie Redknapp in the early stages of his career after the Liverpool captain caught up with his former team-mate on Thursday.

The 34-year-old midfielder broke into the Liverpool first-team when Redknapp was still in his pomp before the former England international went on to suffer from a string of knee problems.

However, Gerrard, who used to clean the former Tottenham midfielder’s boots at the start of his Reds career, has surpassed Redknapp’s Liverpool legacy, becoming one of the club’s greatest-ever players.

But the Liverpool captain, who is set to join Major League Soccer outfit LA Galaxy at the end of the season, hasn’t forgotten how Redknapp helped the midfielder become the player that he is today.

Gerrard posted the above photo and wrote on Instagram: “Great to see a good mate of mine today . Learnt so much of this fella coming through at lfc #skysports @jamieredders”

The Liverpool skipper made his 700th Reds appearance on Wednesday night as Brendan Rodgers’ side came from behind to beat Bolton Wanderers 2-1 and book their place in the FA Cup fifth round.