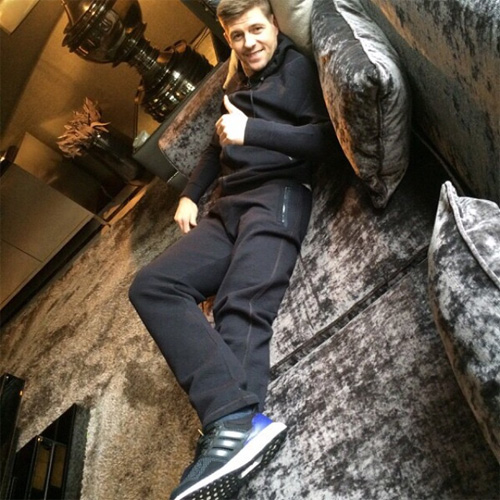 Steven Gerrard is following doctor’s orders and resting his leg after the Liverpool captain suffered a hamstring strain during the club’s 3-2 win against Tottenham Hotspur on Tuesday.

The 34-year-old was replaced by Dejan Lovren midway through the second half of their clash against Spurs after the former England centurion converted a 53rd-minute penalty at Anfield.

Colin Pascoe revealed that the midfielder underwent a scan on the problem on Thursday morning, although the Liverpool assistant manager didn’t indicate how long Gerrard will be sidelined with the problem.

But the Reds skipper, who is set to leave the club at the end of the season, appeared in good spirits after he posted a photo on Instagram to update concerns Liverpool supporters.

He may be Liverpool’s long-serving captain, but feet off the couch Stevie! Seriously.

The Liverpool skipper made his 700th Reds appearance last week as Brendan Rodgers’ side came from behind to beat Bolton Wanderers 2-1 and book their place in the FA Cup fifth round.

Gerrard is set to leave the Merseyside club at the end of the season after a 17-year Anfield career after he agreed a deal with Major League Soccer outfit La Galaxy in January.