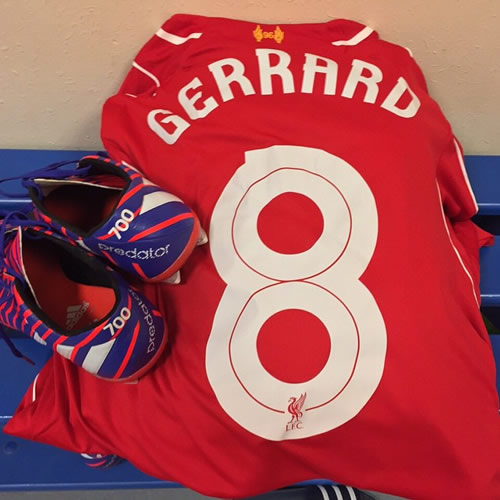 Steven Gerrard took to social media on Thursday to reflect on having made his 700th appearance for Liverpool.

The Reds captain achieved the landmark as he helped Brendan Rodgers’ men book their place in the fifth round of the FA Cup thanks to a 2-1 replay win at Bolton Wanderers on Wednesday night.

The former England captain’s boots were inscribed with the number 700 on them as he played the full 90 minutes against Neil Lennon’s side in the fourth-round replay.

Gerrard posted the picture above on his Instagram account on Thursday morning and wrote: “My shirt and boots last night for my special #700 appearance. Another massive game this Saturday for the boys to prepare for now. #predatorinstinct #therewillbehaters.”

The veteran midfielder will leave Liverpool at the end of the season after the midfielder agreed a deal with Major League Soccer outfit LA Galaxy last month.

The Liverpool legend, who has been at the club for 17 years, will play his final Merseyside derby at Goodison Park on Saturday.

Liverpool are currently seventh in the Premier League table and four points behind fourth-placed Arsenal.