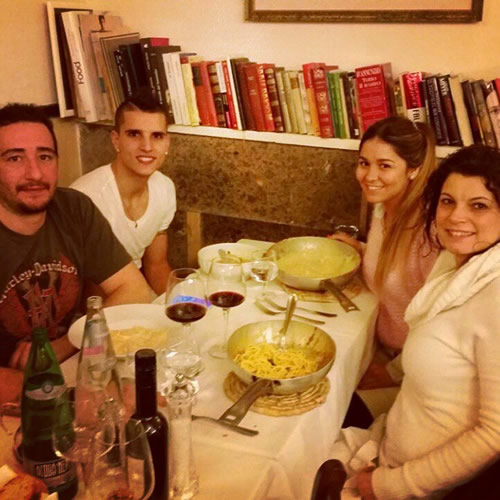 Erik Lamela appears to have made the most of a rare weekend off by travelling to Italy for some well-earned downtime.

Tottenham did not have a game this weekend after they were dumped out of the FA Cup by Leicester City last month.

So Lamela jetted off to Rome to spend the weekend with his friends and enjoy a change of scene.

The Argentina playmaker, who joined Spurs from Roma back in the summer of 2013, posted the picture above on his Instagram account and wrote: “Dinner with my love and my friends in Rome enjoying the weekend and celebrating valentine’s day. Greetings to all. #cena #dinner #sanvalentino.”

The 22-year-old has been a regular fixture in Mauricio Pochettino’s first-team this season. He has made five assists and scored one goal in 22 Premier League games and has also netted twice in the Europa League.

He played the full 90 minutes as Spurs were beaten 3-2 by Liverpool at Anfield last Tuesday and helped the north London side beat local rivals Arsenal at White Hart Lane last weekend.

Photo: James Rodriguez catches up with Arsenal and Chelsea stars