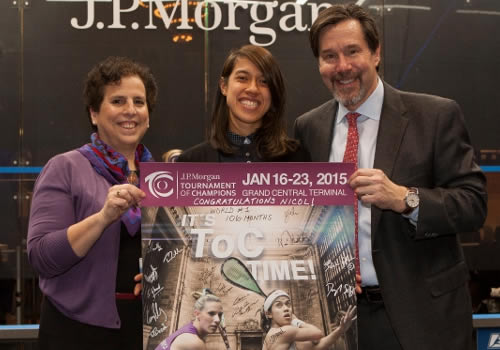 It is hard to imagine what else the remarkable Nicol David could achieve that would burnish her reputation as an athlete any further, but this week she added one more line to what one day will be a packed biography.

Malaysia’s favourite daughter, the 31-year-old David, has set a new world record at the top of squash’s rankings with her 106th month as world No1. She overtakes the record set in 1993 by four-time world champion and eight-time British Open champion, Susan Devoy.

What makes David’s record even more extraordinary is that all but three of those 106 months comprise an unbroken run at the top that began in August 2006—over eight years and counting.

That alone makes a reasonable case for David being not just the queen of squash—one of the most physically demanding individual sports in the world— but one of the finest athletes that any sport has to offer.

It is worth starting with some context for this latest record. Perhaps the most famous of all squash players, Jahangir Khan—who once put together an unbeaten streak of 555 matches—did not equal her No1 longevity, reaching a total of 100 months.

But David’s high plateau of consistency is also punctuated by glittering prizes: eight World Championship titles, five British Open titles, two Commonwealth Games gold medals and four Asian Games gold medals. Yet David remains one of the most charming and modest world champions one could hope to meet, and she was typically understated about her latest landmark:

“Being number one is something you have to earn every day. For me, it is really about playing the tournaments. Everything else is a bonus.”

Had squash made it into the Olympics sooner, David would no doubt have claimed still more gold, and one can only hope that her sport takes its rightful place on the Olympic schedule while she is still plying her elegant, athletic trade.

Amr Shabana, the four-time world champion from Egypt who topped the men’s rankings for 33 months between 2006 and 2008, clearly hopes the same.

“I have known Nicol since she was 11 years old and, even then, I knew she was special. What she has done in squash is amazing… and she isn’t done yet!”