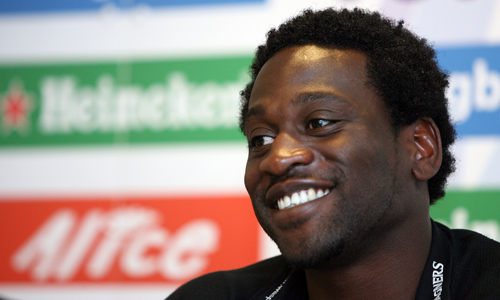 Paul Sackey believes England are blessed with some of the top forwards in the world ahead of Saturday’s Six Nations Championship tie against Italy at Twickenham.

Stuart Lancaster’s side claimed an impressive 21-16 win at the Millenium Stadium last Friday, while their opponents were defeated 26-3 by Ireland in Rome.

The 35-year-old was impressed by the English forwards in Cardiff, and is sure England will triumph on Saturday if they can win that respective battle.

“As a collective, the forwards were fantastic against Wales and they proved that England has some of the best forwards in world rugby,” he said.

“The team has momentum from last Friday’s victory and will now be confident going into the game at Twickenham against the Italians.”

The former England winger is expecting a more controlled, comfortable performance, after a fraught, scrappy affair in the Welsh capital.

“The first game is always tough and nervy,” Sackey told The Sport Review, “but I expect a much more settled game from England against Italy.

“The backs will be important too. They are quick and have a lot of creativity. I’m hoping that our 10, 12 and 13 combination starts to show promise too.”

England beat Italy 18-11 in their last Six Nations game at Twickenham, and according to Sackey, Italy are no longer the perennial whipping boys.

“The days of rolling them over by 50 points are over. Italy are a solid unit and have been playing together for a long time. They are hard to break down,” he said.

The former Wasps player singled out number eight and captain Sergio Parisse and New Zealand-born fly-half Kelly Haimona as two players who could cause England problems.

“We will need to stop those two players – my former team-mate [Sergio] Parisse has the attributes to be one of the top number eights in the world,” said Sackey.

Sackey added that the win against the Welsh will give the more inexperienced players confidence, but playing at Twickenham will be a new, exciting challenge.

“For those newer players in the fold, it’s a different kind of pressure,” he said, “I expect them to cope with it well.

“If England score first, the nerves will settle and give them a chance to showcase their abilities. I expect the talented players like [Mike Brown] Browny, George Ford and Billy Vunipola to shine on Saturday.”