Chelsea fans have made more of a negative than positive impression on Londoners recently, according to a YouGov poll 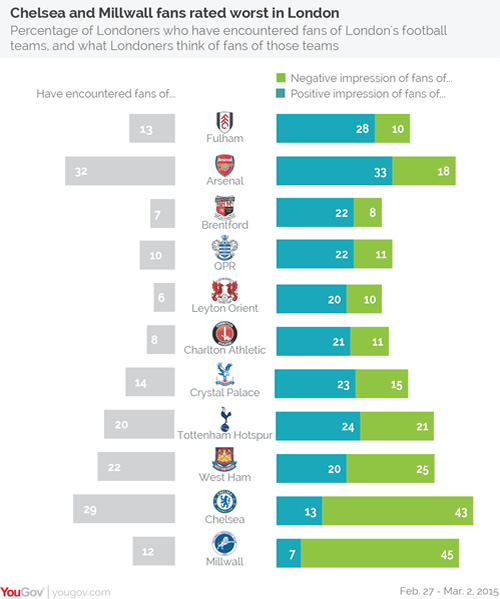 Chelsea fans have been rated as the second-worst in London behind Millwall supporters, according to a YouGov poll.

And it appears that the public image of Chelsea fans has been swayed for the worse, with a poll suggesting that they now have almost as bad a reputation as Millwall fans.

Supporters of Arsenal, meanwhile, have made a much better impression on the public in the capital. Gunners fans are also more visible than Chelsea supporters – 32 per cent and 29 per cent have encountered each group, respectively.

The figures in the poll – carried out from 27 February to 2 March – report that 18 per cent of Londoners have a negative impression of Arsenal supporters, compared to 43 per cent of Chelsea fans.

Fulham, Brentford and Queens Park Rangers’ fans are among the most-liked by the public in the capital, the YouGov figures suggest. Tottenham just cling on to a positive rating, with 24 per cent making a good impression, and 21 per cent negative.

You can read the report in full here.