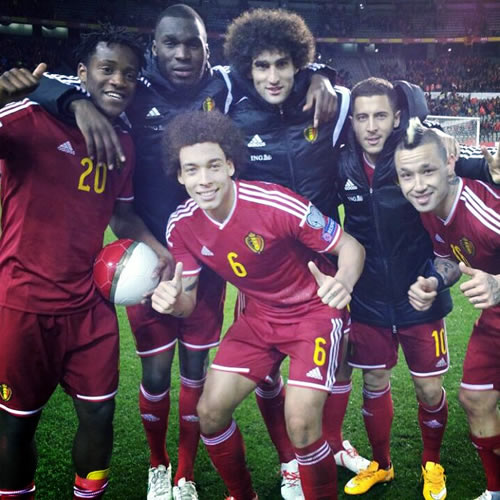 Eden Hazard was all smiles alongside Marouane Fellaini after helping Belgium secure an emphatic 5-0 win over Cyprus on Saturday night.

Fellaini and Chelsea star Hazard then netted within two minutes of each other in the second half, and Michy Batshuayi added gloss to the scoreline with a fifth.

The victory moved Belgium to within three points of Euro 2016 Group B qualifying leaders Wales, and Fellaini and Hazard were clearly delighted to play their part in the victory after the game.

Manchester United midfielder Fellaini posted the picture above on his Instagram account of himself with Benteke and Hazard after the final whistle and wrote: “With my brothers @christianbenteke25 @hazardeden_10 @axelwitsel28 @bouskapee23 great win.”

Meanwhile, Hazard himself shared the picture below on his own account and added: “With my 2 brothers @felli31 @christianbenteke25 great win boys.”

Belgium play Israel on Tuesday in their next Euro 2016 qualifying clash, before taking on group leaders Wales in the summer.

Liverpool’s Philippe Coutinho: Why Brendan Rodgers is a great manager