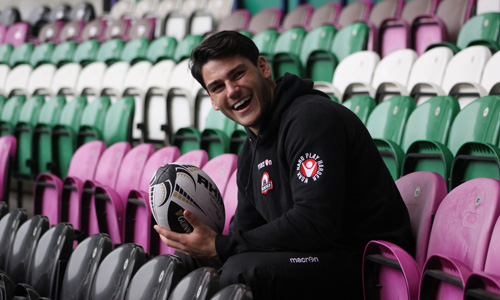 Sam Hidalgo-Clyne hailed Edinburgh’s 26-15 win over the Scarlets in Llanelli as they moved up to seventh in the Guinness PRO12.

The Gunners scrum-half returned from Scotland’s disappointing RBS 6 Nations campaign to put in another man of the match performance as his side handed the Welsh region their first home defeat in the league since December 2013.

We knew they were unbeaten at home, and it’s really tough to get four points here so it’s fantastic that we did.

Sam Hidalgo-Clyne on Edinburgh’s win at the Scarlets

Hidalgo-Clyne’s distribution was crucial to his side leaving the Parc y Scarlets with a much-needed four points to keep them in the hunt for a top-six finish with centre Phil Burleigh and number eight David Denton grabbing first-half tries.

All the Scarlets could muster in response was five successful penalty goals from Steven Shingler in the first half, but Wayne Pivac’s men failed to score a point in the second half, while Hidalgo-Clyne kept the scoreboard ticking over on his way to a 16-point haul.

“It’s been fantastic to get back and get a win here,” Hidalgo-Clyne told Sky Sports.

“This week was a massive game for the club to try and get sixth place in the league.

“It was really important to try getting points against the Scarlets.

“We knew they were unbeaten at home, and it’s really tough to get four points here, so it’s fantastic that we did.

“They put us under a lot of pressure in the second half. They put us deep in our half and we were struggling to get out for a long period of time.

“First half was really good, then coming into the second half we really struggled, but to get back into at the end was good.”

The win for Alan Solomons’ men is a timely boost ahead of next weekend’s European Challenge Cup quarter-finals when Edinburgh travel to Reading to take on London Irish next Sunday.

The winners of that contest will host Newport Gwent Dragons or Cardiff Blues in the semi-finals, and Hidalgo-Clyne, who served as Greig Laidlaw’s back-up scrum-half during the Six Nations, was delighted with the chance to get back into club action after Scotland suffered five defeats from five.

“As a scrum-half now – learning that for a couple of years – I’m really enjoying that and just trying to progress every time.”