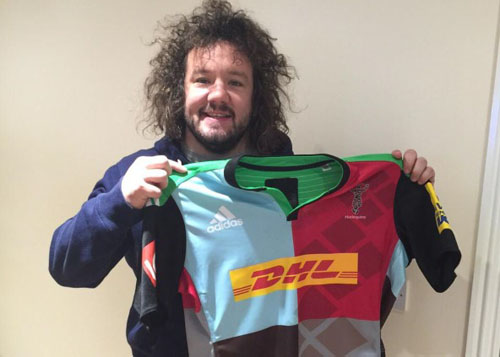 Adam Jones has agreed a deal with Harlequins Photo: Harlequins

Harlequins have announced the signing of British and Irish Lion and Welsh legend Adam Jones.

Jones, who retired from international rugby in January of this year, will arrive next season with an enviable wealth of experience and will be a valuable asset to both Harlequins and the Aviva Premiership.

“We are absolutely delighted to have secured Adam’s services. Not only is it apparent that Adam wants to keep going for some time to come, but the work he will do in supporting and pushing our young tight heads Kyle Sinckler, Will Collier and Matt Shields will benefit us for years to come.

“He is a world class prop and we cannot wait to get him involved. I am sure he will become an instant hit with our supporters.”

A cornerstone for any pack he has played in, the 34 year-old began his career in 1998 at Neath before moving to Ospreys when the region formed in 2003. During his 11 years with Ospreys, he made over 150 appearances, winning the Celtic League on four occasions.

Jones is one of the most recognisable front row forwards in the game and was awarded the first of his 95 Welsh caps in 2003, against England.

Winning four Six Nations titles, the Abercrave-born tight head has competed in the last three Rugby World Cups and toured with the British and Irish Lions on two occasions; first in 2009 and then on the victorious 2013 tour to Australia.

Jones added: “I’m really excited about this new challenge. I have enjoyed my year with the Blues and I’m thankful to The Board and Mike Hammett for giving me a go.

“Contrary to media reports in Wales, I have had options here, but Harlequins is an ambitious and progressive club with good values. Everyone who is there, or who has been there, loves it and having spoken to both Conor O’Shea and John Kingston I was even more impressed.”