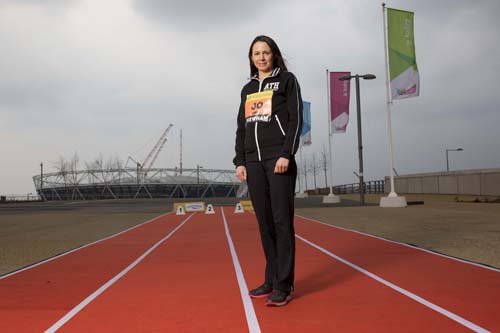 Jo Pavey may be the wrong side of 40 and a full-time mother, but the European champion says her advancing years have helped her reach the heights she never thought she’d hit a few years ago.

The 41-year-old long-distance runner enjoyed a successful return in 2014, winning 10,000m gold at European championships in Zurich before Commonwealth Games bronze in 5,000m in Glasgow.

Pavey made the decision to extend her athletics career by another year with the prospect of a fifth Olympic Games in Rio on the horizon as she embraced the challenge of balancing training and family life with two young children.

Just last week, Pavey tucked into some Mother’s Day chocolates with her family, revealing her secret vice on Twitter, where she regularly interacts with her followers who share her passion for running.

It was nice to realise I could still be competitive

Speaking to The Sport Review, the oldest female European champion admitted that it was a pleasant surprise that she could still challenge the best in her field despite missing most of 2013 through pregnancy.

“It was nice to realise I could still be competitive which I thought would never be the case because I am getting older and older,” she said.

“I am still enjoying it. I still have goals I want to aim for. We’ve pleasantly found that it was work for us as a family so it’s a real bonus to feel in a position to continue really.”

While many of the world’s elite long-distance runners travel to warmer climes to prepare for competitions with altitude training, Pavey is content to keep her sessions local with her husband and trainer, Gavin, and son, Jacob, and daughter, Emily.

“Gav has been hugely supportive,” she said. “It is busy but sometimes we make training family fun, where we all go to the forest and my little boy will be on his bike and my husband will be there with our little girl on the back of the bike and we enjoy it in that way. I am motivated by my family.

“I was worried about not spending months going to South Africa and places like that and the impact that was going to have on my running but it has just shown me that being at home, having that security for the kids is fine as long as you train hard and that seems to be the most important thing.”

Pavey was keen to point out that other ‘super mums’ that have provided her with inspiration, such as three-time London Marathon winner Paula Radcliffe and Olympic silver medallist Sonia O’Sullivan.

A balanced family-training life and her wealth of experience could explain how Pavey bettered her European Championship silver medal in Helsinki three years ago with 10,000m gold in Zurich last year.

The Exeter Athletic Club member, who helped launch the Great Newham Run earlier this week, feels better-placed to judge the limits of her body than in the earlier stages of her career.

“When I was younger, it would have been useful to know what I know now, it would have helped me to avoid a lot of the injuries I got and things like that so there are benefits of getting older, that you have got more experience,” she continued.

“I have definitely developed in what aspects of training are more important and that I need to listen to my body and being more flexible with what I do.”

First up for Pavey in 2015 is the Great Manchester Run as she looks to win the event for a joint-record third time upon her return to the streets and roads of England’s second-biggest city.

She’ll be joined by 40,000 fellow runners in Manchester on Sunday 19 April as the European champion starts her long road to a potential fifth Olympic Games.

Pavey will be on the brink of her 43rd birthday if she does indeed make the cut for the Great Britain track and field team for Rio.

And when asked to write the ending to her own super-mum fairytale, Pavey replied: “Competing in my fifth Olympics would be a big target.

“I am not saying that will definitely happen because I am not complacent about how hard it is to get into the team in the first place.

“That’s going to be a tough thing to do and I am getting older and older and these young girls coming through.

“The possibility of competing in Rio, that would make me happy if I got to do that.”

After a triumphant 2014, she may just find herself booking a trip for a family of four to Brazil next year.