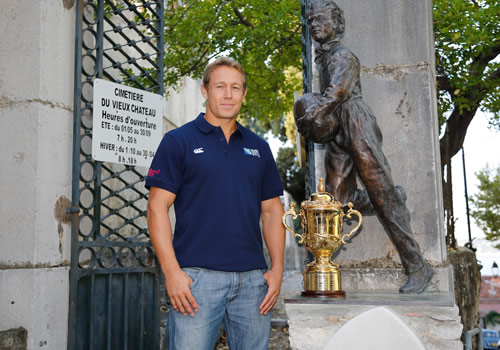 Jonny Wilkinson has played down speculation that he will join England’s coaching team for the Rugby World Cup.

The 2003 Rugby World Cup winner insists that the Red Rose already have all the coaches they need and there is no truth to a report that originated in France suggesting he would be parachuted in as a kicking consultant.

They’ve already got all the coaches they need and everyone can see how good the job is that they are doing.

Snapped up by former club Toulon as a specialist skills coach, Wilkinson believes that his services are not required as England look to win the Rugby World Cup on home soil.

“They’ve already got all the coaches they need and everyone can see how good the job is that they are doing,” Wilkinson said.

“There’s no need for me to be there, apart from just to be positive.

“It came out of France, which is why it’s so random. I don’t know why they would know anything about what I’m supposed to be doing.

“There’s absolutely nothing I can say about that story, honestly, it’s the most difficult thing, because I can say actually nothing about it.

“It’s as clear as, I imagine, someone has decided ‘I’m going to write this’ and then there’s a story.

“It’s not annoying. It makes no difference to my life either way, but it probably does to you guys.”

Wilkinson, who lives close to England’s Bagshot base, was speaking at the launch of Land Rover’s ‘We Deal in Real’ Rugby World Cup 2015 campaign, which aims to put grassroots rugby at the heart of the build-up to the showpiece competition.

But Wilkinson insists there is nothing to read into his friendly interactions with the players and coaches.

“In terms of being around England, it’s great because there’s no feeling that I need to sneak through,” Wilkinson added.

“If I see someone – Stuart Lancaster, Graham Rowntree or the players – I just say ‘hi, how’s things?’

“I live just round the corner and I use the gym, so sometimes when I’m walking down to the gym I’ll bump into [Mike Catt], and I’ll ask him how things are.

“Sometimes I’ll bump into Andy Farrell or Mike Brown, who I’ve played with and against. When you see them it’s good to have a catch-up.

“I live at the gym as well, which doesn’t help.

“That’s probably the main thread here, that unfortunately I’m at the gym too much, so it might look like I’m hanging out with the squad when I’m not.

“It’s nice to be around that atmosphere, it reminds a fair bit of what I used to be up to.”

Despite his specialist work on a part-time basis with Toulon, and his ad hoc involvement working with England’s backs, Wilkinson still has doubts about whether he will seek a career coaching players.

“I have serious reservations about my ability to coach groups of players.

“It’s a very different job from one-on-one coaching, where you get to know a personality, you understand them and work with them on a day-to-day basis.

“It’s a very different job and a very, very tough job taking a group and living that life.

“What I do know is that I absolutely adore working with people one-on-one and getting to know people really well, finding out what they need and trying to supply that in an ongoing supportive role.”