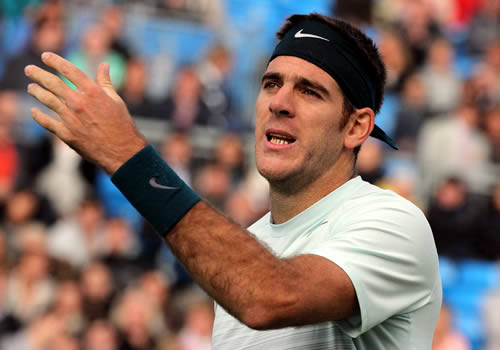 Some men faced with the lay-offs that Juan Martin del Potro has endured since he burst into the headlines, aged just 20, to beat Roger Federer in the final of the US Open in 2009, may have thrown up his hands in despair and walked away.

Having broken the top four at the start of 2010, he would go on to play only three tournaments that year, forced into right wrist surgery that would decimate his season and rankings.

Slowly but surely, he worked his way back to the top 10, earning the ATP’s Comeback Player of the Year Award in 2011, a bronze medal at the Olympics in 2012—along with four titles from five finals—before reclaiming the No4 ranking with four 500 titles and two Masters finals in 2013.

And then disaster struck all over again, this time with his left wrist. Del Potro began 2014 with the Sydney title, but was forced to retire in Dubai, and he would undergo more surgery in March. He aborted his planned return during the Asian swing, finally coming back this January in Sydney.

But that too ended prematurely, and Del Potro headed back home for more surgery on the same left wrist. He took a wild card in Indian Wells, but was forced to give it up. So it was with some trepidation that the popular Argentine’s fans awaited his promised appearance in Miami this week.

Now ranked at 616, Del Potro did not even get a lucky break in the draw: a first-round match against the big and talented Vasek Pospisil is not the kind of opener any player wants, but especially in only the fourth match in the space of over a year. And should the Argentine make it over that substantial hurdle, he would face No9 seed Grigor Dimitrov—but in the event, Del Potro did not make it that far.

Playing in just his second Miami Open, the 24-year-old Pospisil produced the kind of tennis that has made many tip him for great things in the future: Big serving, a fierce and penetrating forehand, and some very fine net skills honed by an enthusiasm for doubles tennis.

Pospisil, partnered with Jack Sock, has won Wimbledon, Atlanta, and Indian Wells, and flashes of that same speed and touch have at times burst out in his singles tennis, but not with the confidence he has shown in doubles. In this match, however, it proved to be one of the keys to unpicking Del Potro’s undercooked baseline game.

It took the young Canadian almost two hours, and he had to fight off break points in the fifth and the seventh games, but he rose the challenge with some fine serving and a couple of screaming down-the-line forehands.

A serve-and-volley winner took him to 5-4 in the first set, and he was then gifted a break: Del Potro made his third double fault, and conceded the set with a shanked forehand.

Pospisil had dropped only two points on his first serve and hit 12 winners to Del Potro’s one, with both making a dozen errors. But come the second set, both men held serve more easily, with just one break point apiece, one break of serve apiece.

Pospisil fought off two set points in the tie-break, helped along the way with the seventh double fault of the match from Del Potro, before sealing his first Miami win, 7-6(7).

The Canadian’s attacking tactics earned him 36 winners to only nine from his opponent, but Del Potro was pragmatic about his performance:
“I didn’t serve well in the special moments, but I’m OK. Just playing the tournament and being here means a lot for me… It doesn’t matter how long it takes me to be at the top again. I just wanted to play tennis and without pain.”

Pospisil spotted that the Argentine’s double-handed backhand was not yet back to the powerhouse shot of old:
“I didn’t really know what to expect. That was a little added stress, but at the same time, I was focused on serving well and playing my game.

“Whether he had pain or not, he wasn’t hitting the same backhand that he normally plays, and I tried to take advantage of that by coming in and putting pressure on that side. But he was still serving well, which made it tough, so I just hung in there and maybe got a little bit fortunate at the end.”

So it is Pospisil who goes onto meet Dimitrov in a battle of the young guns. But elsewhere in the same half, there were younger men making their way to the second round, too: teenage stars Borna Coric and qualifier Alexander Zverev.

Eighteen-year-old Coric, in a repeat of his victory at Indian Wells, beat Andreas Haider-Maurer, but it took him an hour longer to do so, 1-6, 6-3, 7-6(3). Hit by cramps, the young Croat, who stands at a career-high 59, came back from 1-4 down to serve for the match at 6-5, only to be broken again. Coric eventually held the tie-break after two and a half hours of tennis. He next plays another of the rising generation, the hugely-talented 24-year-old David Goffin.

One more 24-year-old, a former Wimbledon semi-finalist, the 6ft 8in Jerzy Janowicz, also advanced, 6-4, 6-2, over Edouard Roger-Vasselin. He next plays No13 seed Roberto Bautista Agut.