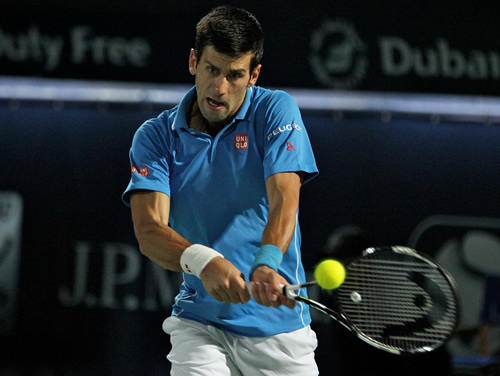 With Roger Federer opting out of the Miami Masters, there will be no ‘decider’ for Novak Djokovic’s as he prepares to defend his Florida title.

He and Federer faced off in their last two tournaments, sharing the honours in Dubai and Indian Wells, but Miami promises a different line-up come final day—though one that still seems certain to feature Djokovic. As for who will face him, No2 seed Rafael Nadal and No3 Andy Murray are scheduled to fight for that honour… though a heavy-weight bottom half that also includes Stan Wawrinka and Tomas Berdych, may upset that particular apple cart.

But as sure as night follows day, surely the world No1 will be there again as he grows in stature with every month that passes.

He already stands 4,000 points clear of Federer in the rankings, and well over 7,000 clear of Nadal in third place. He is certain, then, to remain No1 for the three weeks required to overtake Nadal for the total weeks at the top of the rankings. By the time the tour hits clay, Djokovic will reach 142 weeks, second only to Federer among active players.

The Serb has won the title in Miami four times, and has done the near-impossible Indian Wells-Miami double twice. Only Federer has done that, so Djokovic could set a new standard by repeating the feat this year.

With the Indian Wells title, he rose to 21 Masters titles, only two short of Federer, and is the most prolific winner of the ATP’s jewels in the crown in the last five years.

He already has the two most valuable titles of the year so far, the Australian Open and Indian Wells, taking his tally to 50 titles.

That he looks, speaks and plays with a more confident air than ever—having embraced fatherhood and his standing at the top of tennis with aplomb—only makes his chances of success the stronger.

So what of the rest, in this glamorous, tropical, high-octane Miami Open? Who among his key rivals, or among the ambitious up-and-comers or the returning absentees, can make an impression amid the saturated colours of Key Biscayne?

Certainly the talent on show on Crandon Park’s vivid violet courts is impressive, even without Federer and the US Open champion Marin Cilic—delaying yet again his return from shoulder injury. Still 23 of the top 25 are here, and there is also, at long last, Juan Martin del Potro, making his first appearance since wrist surgery in January. Even more of an unknown quantity is No11 seed, Jo-Wilfried Tsonga, playing for the first time since arm injury blighted the end of 2014.

One thing is clear. The top challengers, Nadal and Murray, will both hope to make their mark in Miami. Nadal will rue so close a quarter-final loss to one of the chasing pack in the rankings, Milos Raonic, in Indian Wells. The Canadian is only 650 points behind him, while Murray and Kei Nishikori are both within 350 and able to gain points if Nadal does not defend his final finish last year. In any case, Nadal has four times made the Miami final, twice the semis. The title at last would be sweet.

Murray, too, will be only too aware of how close the rankings are between Nadal just 115 above and the next five players down to No9 Berdych little more than a 1,000 points below. This is also as close to home as Murray gets outside the UK: Miami has long been a training base and yielded much success: two titles and a final. Should he reach the quarters, as he did last year, he will also reach his 500 match-win milestone, having just last week become the most successful Briton in the Open era.

Last year, it was here that Murray parted ways with Ivan Lendl. If nothing else, he would surely relish winning this one for his current coach Amelie Mauresmo.

After his exertions in California, Djokovic has plenty of time to adjust to the humidity of Miami, scheduled to play his opening match on Saturday. He begins against Paolo Lorenzi or Martin Klizan. His first seed is late bloomer, the big serving Gilles Muller, with No16 Tommy Robredo—also proving that 30 is no barrier in tennis—in the fourth round. The Spaniard, though, has some tripwires in the shape of Alexandr Dolgopolov plus Lleyton Hewitt making a last Miami appearance.

Djokovic is lined up to meet David Ferrer in the quarters, and the feisty, evergreen Spaniard was a finalist here in 2013. And to get to the quarters, Ferrer has to get by a tricky opening section that includes No48-ranked 21-year-old Jiri Vesely and 17-year-old 6ft6in Alexander Zverev. His seeds are Luckas Rosol, then Ivo Karlovic or Gilles Simon: In short, a tricky section for Ferrer, not too much hassle for Djokovic. 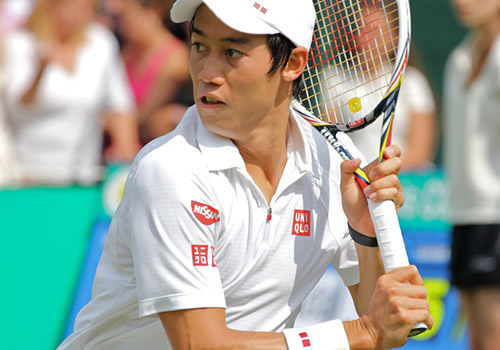 The Japanese man briefly hit No3 just weeks ago after a strong run in Australia, Memphis and Acapulco, but hit a tough early draw in Indian Wells to lose in the fourth round. Miami should see him bounce back: He beat Grigor Dimitrov, Ferrer and Federer back to back here last year before pulling out of the semis. But again the draw has not been kind.

The likes of Mikhail Youzhny, Marcos Baghdatis and Simone Bolelli stand between him and first seed, the fast rising, big-serving Viktor Troicki. Round 4 holds seeds David Goffin or Roberto Bautista Agut, but with young star Borna Coric plus Jerzy Janowicz also in contention.

The bottom section is packed with intrigue, too, especially for Dimitrov who opens against either Vasek Pospisil or del Potro—one of the opening matches of the tournament—and sees man-of-the-moment Raonic in the fourth round. Aside from reaching at least the quarters of eight of his last Masters events, Raonic hung tough in beating Nadal to reach the Indian Wells semis last week.

So the two youngest men in the top 10, Nishikori and Raonic, could meet for the seventh time in under a year, and every match has been fought to the death. It would be a treat for the fans, not so great for whoever goes on to meet Djokovic. 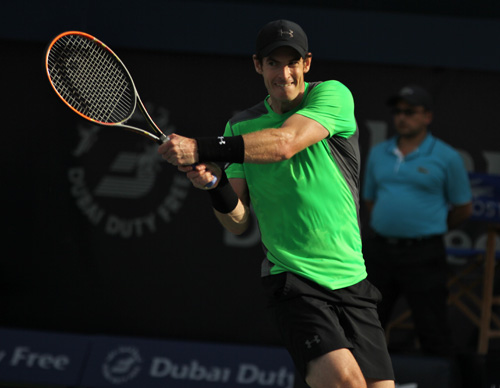 If Murray wants to avenge his tough losses to Djokovic in the Australian Open final and Indian Wells semis—and halt his six-match losing run—Miami seems a good place to start. He knows the courts well, trains here, and has won here.

He certainly should not have too much trouble getting to the quarters, his seeds in sequence being Santiago Giraldo and either Kevin Anderson or Leonardo Mayer. As luck would have it, the only other Briton, wild card 20-year-old Kyle Edmund, is a possible third-round opponent, though he has an in-form Robin Haase in his opener.

But the quarters hold No7 Wawrinka, who may be tested by young star Thanasi Kokkinakis: the Aussie wild-card reached his first Masters fourth-round last week. Wawrinka’s first seed is career-high No32 Adrian Mannarino. The Swiss could next face Indian Wells quarter-finalist, Feliciano Lopez—another mature player at a career-high—or the unpredictable Fabio Fognini, though young talents Jack Sock and Dominic Thiem are also here.

But with neither Wawrinka, Fognini nor Lopez ever getting beyond the fourth round in Miami, there is room for a breakout run elsewhere.

Nadal may be yet to win the title in Miami but he has enjoyed real success here, reaching the first of four finals when just 18. Miami draws a big Latin American following, and thus plenty of support, too.

The rust from a miserable 2014 packed with injury and illness is starting to wear away, though Nadal twisted his ankle in practice at the start of the week. He took to Twitter to say all seemed well, but that will be tested in a difficult opener against either Nicolas Almagro or Sergiy Stakhovsky. Fernando Verdasco is his first seed, with either another Spaniard, Guillermo Garcia-Lopez—close to his career-best—or the floundering Ernests Gulbis in the fourth round.

Nadal’s quarter-final opponent could be one of three men: Tsonga returns to the fray for the first time this year, who takes on Gael Monfils, also back from injury, in the third round. The survivor faces Berdych or in-form Bernard Tomic in the fourth round—and it’s hard to see beyond these names for a quarter-final face-off with Nadal.