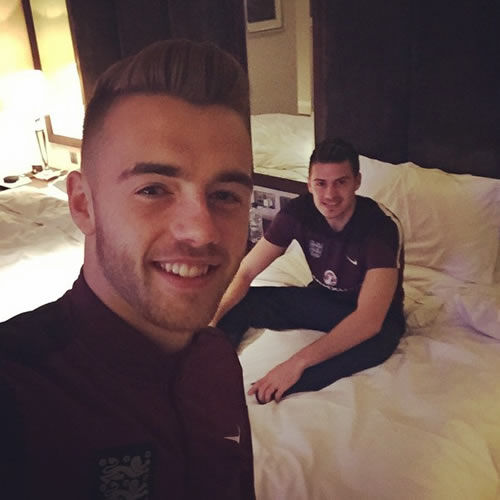 Calum Chambers was all smiles as he posed for a selfie with his England Under-21 team and room-mate Jonathan Bond on Saturday evening.

The Arsenal defender played 61 minutes as England secured a 1-0 win over the Czech Republic in Prague on Friday night to secure a 12th win in 13 games for Gareth Southgate’s side.

Tom Carroll scored the only goal of the game soon after half-time to wrap up victory for the visitors.

Chambers posted the picture above of himself with goalkeeper Bond on his Instagram account and wrote: “Back in England! Time to chill with my roomie @bondy506”

Chambers has enjoyed a breakthrough season at Emirates Stadium since his switch to Arsenal from Southampton last summer.

The 20-year-old has made 22 Premier League appearances for Arsene Wenger’s men so far this term.

He has scored one goal for the north London club – during the 3-0 win over Burnley in the Premier League back in November.