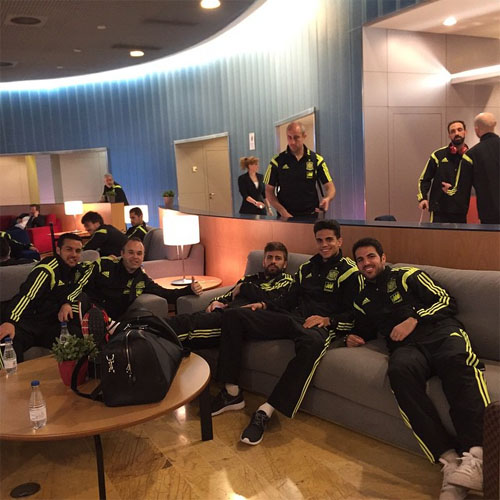 Cesc Fabregas relaxed with his Spain team-mates ahead of their clash against the Netherlands in a friendly on Tuesday.

Spain are set to face their old rivals for the first time since a humiliating 5-1 defeat by the Dutch in their opening game of the World Cup in Brazil last summer.

La Roja edged to a 1-0 victory over Ukraine in their Euro 2016 qualifier on Friday night thanks to Juventus striker Alvaro Morata’s 28th-minute winner.

And the Spain squad looked in a good mood as Fabregas snapped the above photo with his former Barcelona team-mate Gerard Pique, Andres Iniesta and Pedro on Monday morning.

Vicente del Bosque’s men are second in Group B behind Slovakia after Spain slipped up against the group leaders.

Spain were famously 1-0 winners against the Netherlands after extra-time in the 2010 World Cup final in South Africa.

Fabregas was part of the squads that won Euro 2008, the World Cup and Euro 2012 before their surprise group-stage exit in Brazil last year.