Eden Hazard was clearly in a good mood on Monday night... 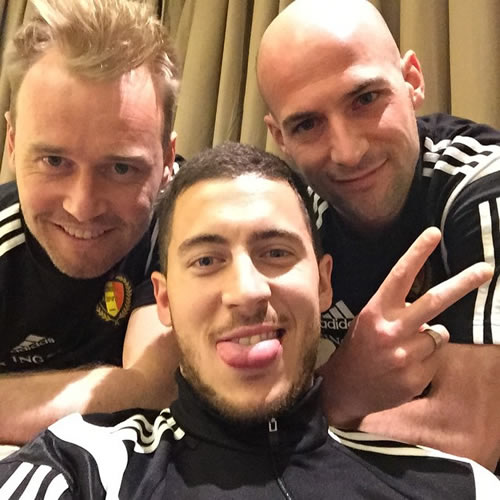 Eden Hazard appeared to be in good spirits as he and his Belgium team-mates prepared for their Euro 2016 qualifying clash with Israel on Tuesday night.

The Chelsea playmaker scored one and set up another as Belgium ran out 5-0 winners over Cyprus last week in their most recent qualifying game.

And the 24-year-old looked to be in a good mood as he posed for a light-hearted selfie on Monday evening.

Hazard posted the picture above on his Instagram account and wrote: “Relax in the room before the game tomorrow… #ciman #gillet”

Hazard has been one of the driving forces behind Chelsea’s Premier League title bid this season, scoring 11 goals in 29 top-flight games.

Chelsea return to Premier League action when they take on Stoke City at Stamford Bridge on Saturday afternoon.

The Blues are currently six points clear at the top of the Premier League table but have played a game less than their closest rivals.

Jose Mourinho’s men still have to face Arsenal, Manchester United and Liverpool in the season’s run-in.