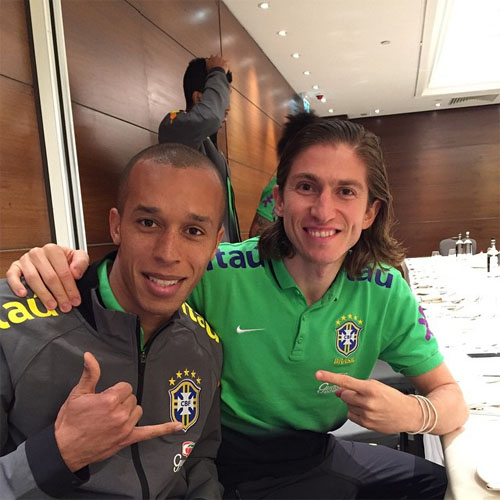 Manchester United fans will be hoping that Chelsea defender Filipe Luis was inadvertently doing his rivals a favour and selling Miranda on the merits of the Premier League after uploading a photo with his fellow Brazilian defender.

The Atletico Madrid centre-half has been linked with a move to the 20-time English champions for much of the season, and talk of a potential transfer has been fuelled by his inability to tie down a regular starting place at Los Rojiblancos.

Miranda, who played alongside Filipe Luis at Vicente Calderon before the left-back completed a £19m move to Chelsea last summer, was a key part of Diego Simeone’s side that won the La Liga crown and finished as Champions League runners-up last season.

The Chelsea full-back, who has been linked with a return to Atletico as part of a deal to bring Koke to Stamford Bridge, uploaded a photo with Miranda on Instagram on Saturday evening, referring to the defender’s winner in their Copa del Rey triumph over Real Madrid in May 2013.

The South American centre-half has scored three goals and has made one assist in 23 appearances in all competitions for Atletico this season.