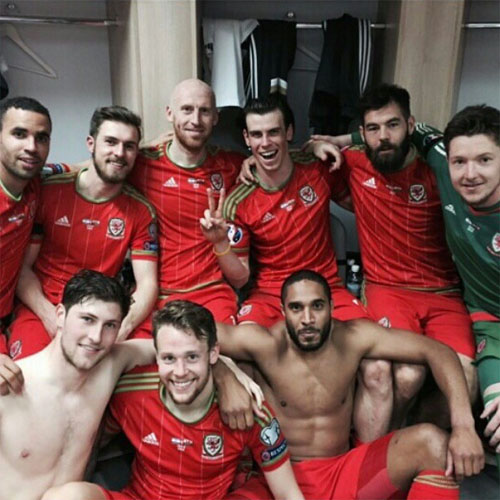 The Wales squad after 3-0 win in Israel Photo: Gareth Bale/Instagram

It was no surprise that Gareth Bale looked delighted to be back with the Wales squad on Saturday after the forward’s car was attacked by disgruntled Real Madrid fans last weekend.

The Wales international put that incident behind him last night with an impressive performance against Israel in their Euro 2016 qualifying encounter in Haifa.

Bale scored twice in the second half to seal a 3-0 win against Israel after Arsenal midfielder Aaron Ramsey had broken the deadlock in the Group B clash.

The £85.3m midfielder posted a snap with some of his Wales team-mates, including Tottenham defender Ben Davies and Ramsey, following the win that leaves Chris Coleman’s side two points clear at the top of their group.

Bale wrote: “What a performance from the lads!”

Bale has endured a mixed season at The Bernabeu, although the Welshman has scored 12 goals and has made five assists in 25 La Liga appearances.

The former Tottenham star won the Champions League and Copa del Rey in his first season in the Spanish capital.