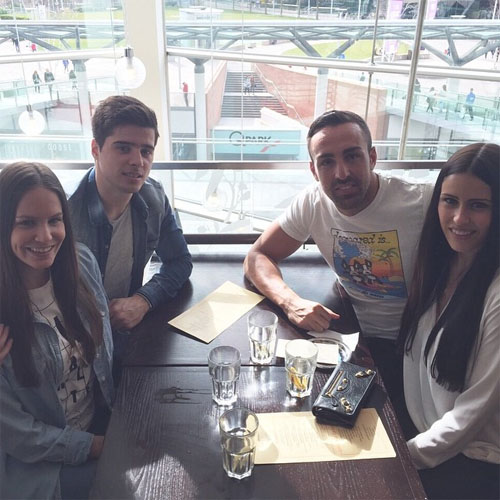 Jose Enrique has described Joao Teixeira as a “future Liverpool star” after the Reds defender posed for a snap with the Portuguese youngster on Saturday night.

Teixeira is a name familiar with most Liverpool supporters, although the 22-year-old has yet to fulfil his potential in a Red shirt following his move to Anfield from Sporting Lisbon in 2012.

Liverpool manager Brendan Rodgers sent the Portugual Under-21 international on loan to Brighton and Hove Albion earlier this season, and the midfielder has scored a respectable six goals in 28 Championship appearances.

Enrique, who is making his comeback from a recent knee problem, brought his girlfriend Amy Jaine along to meet Teixeira and the Brighton star’s lady friend, posting a snap of the quartet on his Instagram page.

Enrique wrote: “Really nice to have our friends over here in liverpool. Future liverpool star for sure @joaovilaca8”

The uncapped Spanish defender is hoping to make an appearance in Steven Gerrard’s game at Anfield on Sunday, which sees current and past Liverpool star line out to raise money for charity.