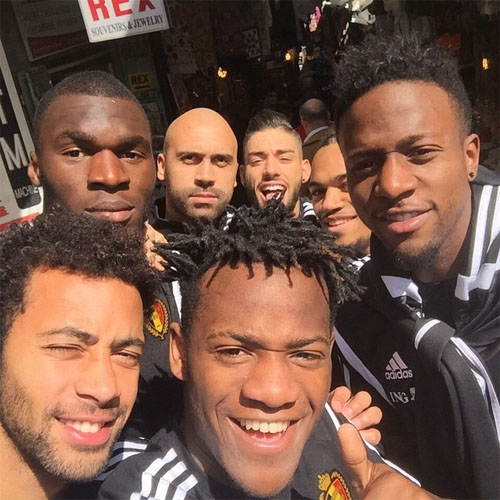 Divock Origi has snapped a holy selfie with Tottenham Hotspur midfielder Moussa Dembele and some of their Belgium team-mates in Jerusalem.

The Liverpool striker, who is currently on a season-long loan at Lille, has travelled with his compatriots to the birthplace of Jesus Christ ahead of their Euro 2016 qualifier on Tuesday night.

Squad selfies on international meet-ups appear to be a new entrant in football’s 10 commandments following their soaring popularity over the past 12 months, and 19-year-old Origi obliged with a Belgium effort in the holy land on Wednesday afternoon.

Origi was linked with a move to Liverpool in January after the Reds struggled without injured Daniel Sturridge earlier in the season.

However, Brendan Rodgers opted against bringing the Lille striker to Anfield ahead of schedule after Liverpool agreed a £12m fee for the striker with the Ligue 1 club last summer.

The Belgium international has scored six goals in 25 Ligue 1 appearances this season.