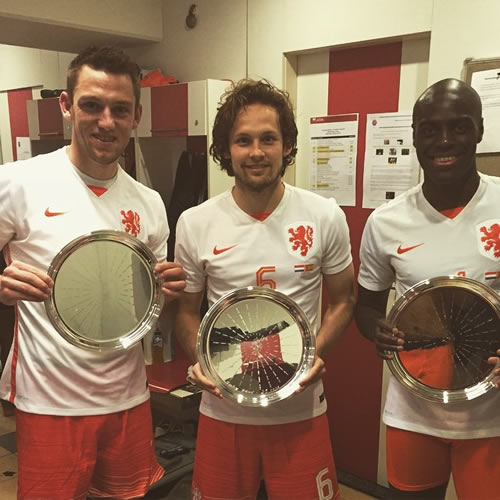 Daley Blind took to social media on Tuesday night to reveal his delight at having helped the Netherlands beat Spain 2-0.

The Manchester United man played 73 minutes as Guus Hiddink’s side beat the European champions thanks to goals from Stefan De Vrij and Davy Klaassen.

Blind picked up his 25th Oranje cap during the win along with De Vrij and Bruno Martins Indi, and the trio were presented with commemorative trophies after the game to mark their milestone.

Blind, who joined United from Ajax last summer, posted the picture above on his Instagram account and wrote: “Happy with the win against Spain! What a result! Also proud of my achievement; 25 caps for the Dutch squad! Congrats to @stefandevrij3 and @brunomartinsindi.”

The 25-year-old Blind has scored two goals and made one assist in 18 Premier League games for Louis van Gaal’s side so far this season following his switch to Old Trafford last summer.

United are currently fourth in the Premier League.