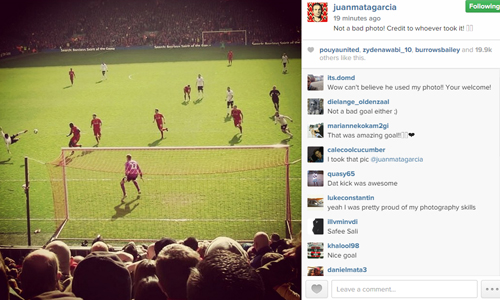 Daley Blind was still savouring Manchester United’s victory at Anfield on Instagram yesterday, and match-winner Juan Mata has joined his team-mate in reflecting on his special strike against Liverpool on social media.

The Spain international, in his own words, enjoyed one of the best days of his playing career after the former Chelsea midfielder broke the deadlock in the north-west derby with a low finish past Simon Mignolet in the 14th minute.

However, the £37.1m signing’s Sunday afternoon got a whole lot better when Mata managed to acrobatically guide a volley past the Liverpool goalkeeper to put the visitors 2-0 up on Merseyside in sensational fashion.

Mata described the strike as easily one of his best, and the 26-year-old, who is a keen photographer judging by his Instagram, marvelled at a supporter’s snap of the moment the midfielder made contact with Angel di Maria’s cross.

Mata wrote: “Not a bad photo! Credit to whoever took it!”

Mata has scored seven goals and has made three assists in 25 Premier League appearances this season, racking up just 1,662 minutes of top-flight action.