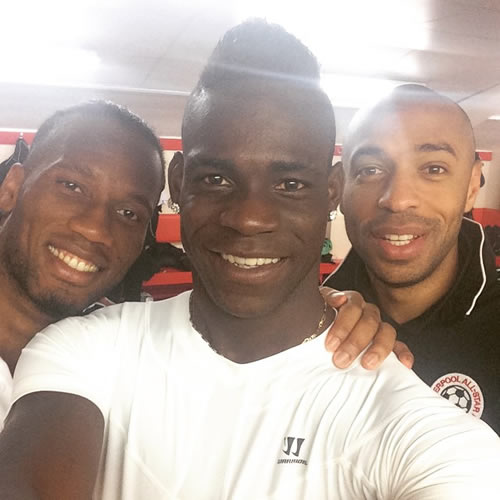 Mario Balotelli was all smiles as he posed for a picture with Didier Drogba and Thierry Henry after the Liverpool All-Star charity match at Anfield on Sunday.

Steven Gerrard scored twice from the penalty spot after Balotelli and Drogba had given Jamie Carragher’s XI a 2-0 lead as the game ended in a 2-2 draw on Merseyside.

Balotelli was clearly delighted to take to the same pitch as two Premier League legends after the final whistle at Anfield.

The Italy international posted the picture above on his Instagram account and wrote: “@didierdrogba #thierryhenry LEGENDS. Always nice to see you guys, @didierdrogba you are welcome for my pass.”

Balotelli has endured a stuttering start to his career at Anfield since his £16m transfer to the Merseyside club from AC Milan last summer.

The 24-year-old forward has scored just one Premier League goal in 14 games for Brendan Rodgers’ men so far this term.

He will be hoping to feature when Liverpool travel to Arsenal in the Premier League on Saturday lunchtime.