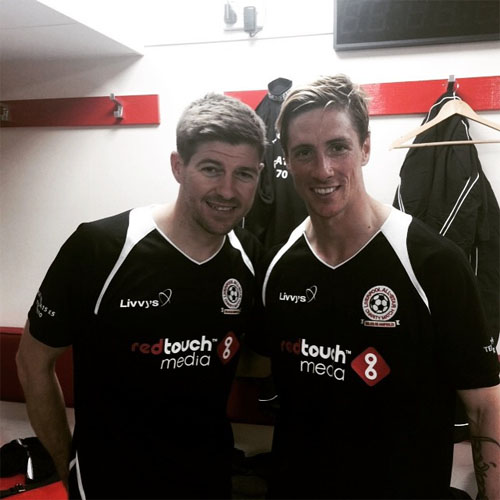 Fernando Torres thanked Liverpool fans for their warm welcome at Anfield on Sunday before the striker posted a photo with Reds captain Steven Gerrard on Instagram.

The Spain international made his return to Anfield in red colours after Torres was a second-half substitute for Gerrard’s XI in a special charity game to raise money for the Liverpool foundation.

Gerrard and Torres formed a devastating partnership between 2007 and 2011 before the World Cup winner controversially moved to Chelsea in a then British-record £50m transfer.

The 30-year-old was clearly delighted to be back with his old team-mate on Sunday, though, as Torres uploaded a snap with Gerrard after their 2-2 draw with Jamie Carragher’s XI.

The Atletico Madrid striker added a touching tribute Liverpool fans after their generous welcome for Torres, who was clearly delighted to get a good reception despite his contentious move to Chelsea in 2011.

Torres added: “Thank you Liverpool supporters for everything you gave me in my career, you are just different class. It is a privilege to play in front of you again. Today I feel in peace with myself , hearing you singing my name is something I will never forget. From the bottom of my hart thank you so much Liverpool!!! #YWNWA”