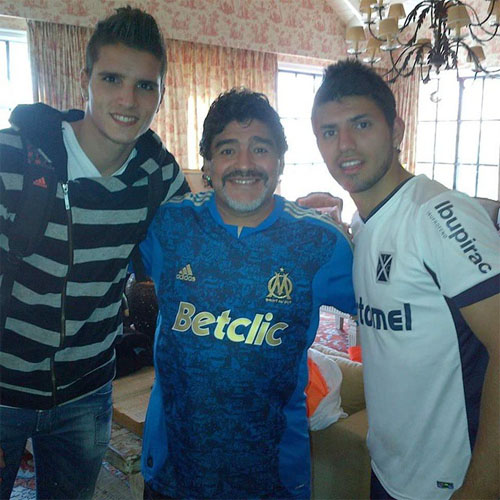 While Maradona underlined his undisputed talent with a World Cup crown in 1986, Aguero and Lamela still have some way to go before the pair can be considered Argentina legends in their own right.

Citizens forward Aguero has already scored 22 goals in 59 appearances for the national side, as well as appearing in two successive World Cups, helping the South Americans reach last summer’s tournament.

Lamela, though, is still waiting to represent his national side at a major tournament, although Tottenham’s record signing has scored one goal in 10 appearances for the World Cup runners-up.

Lamela wrote: “Old photo with two legends … a pleasure to have played with you”

The Spurs forward has scored one goals and has made five assists in 20 Premier League appearances for the north London side this season.

Aguero, meanwhile, is the Premier League’s third-highest goal-scorer this term with 17 goals in 26 top-flight games.