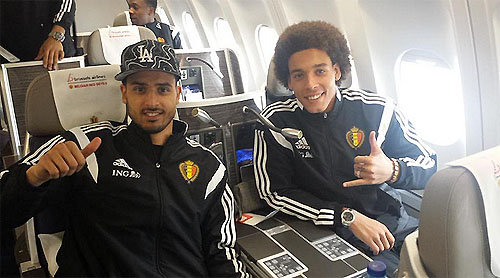 Nacer Chadli and Axel Witsel gave an insight into the current mood in Belgium squad with a smiley snap after a 5-0 win against Cyprus.

The World Cup quarter-finalists strengthened their bid to reach Euro 2016 championship with an emphatic win in Brussels.

Witsel played the full 90 minutes of the qualifier, whilst Tottenham midfielder Chadli was an unused substitute.

The Zenit St Petersburg midfielder has been linked with a move to Old Trafford after previously speaking of his affection for Manchester United.

And Witsel had plenty of time to quiz his Belgium team-mate on the Premier League as the pair sat next to each other on their flight to Israel.

Witsel wrote on Twitter: “to Israel with my bro @NChadli #reddevils”

Wales are top of Group B after Chris Coleman’s side were 3-0 winners against second-placed Israel on Saturday night.

However, Belgium can move above Wales on goal difference if they emulate Coleman’s men and beat Israel next week.