Photos: Gerrard snaps pictures with Liverpool stars past and present 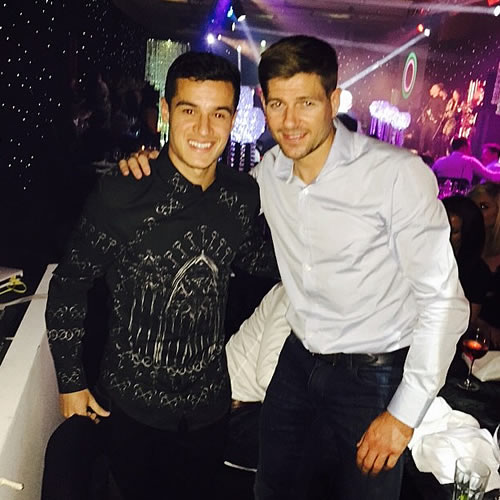 Steven Gerrard took to social media on Monday morning to share some of his favourite pictures following the Liverpool All-Stars charity match at Anfield on Sunday.

Gerrard scored twice from the penalty spot after Mario Balotelli and Didier Drogba had given Jamie Carragher’s XI a 2-0 lead as the game ended in a 2-2 draw on Merseyside.

The Liverpool captain, who is set to leave his boyhood club at the end of the season, caught up with some of his current and former team-mates after the game.

Gerrard posted the picture above of himself with Liverpool playmaker Philippe Coutinho and wrote: “The magician @phil.coutinho”

The Liverpool skipper also shared the snap below of himself with former Reds forward Dirk Kuyt, along with the caption: “Top top lad this fella @11dirkkuyt.”

And Gerrard also caught up with former Liverpool goalkeeper Pepe Reina after Sunday’s game. He shared the picture below of the duo.

Gerrard is suspended for Saturday’s Premier League clash with Arsenal at Emirates Stadium.