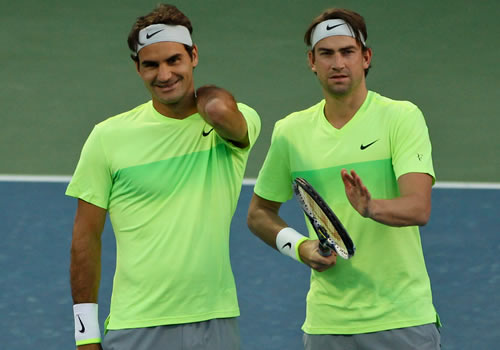 Michael Lammer turns 33 next week, so perhaps he will remember his last professional tennis match in Indian Wells this week as a particularly special birthday present.

He did, after all, play it with Roger Federer, not just one of the greatest ever to lift a tennis racket but also one of Lammer’s oldest friends, a former flatmate and Davis Cup comrade. Not a bad way to draw a line, then.

The Swiss duo only just lost their opening match, too, but Lammer sounded more than happy to end it this way, and why not? How many journeymen playing the grind of the ATP merry-go-round, reaching a creditable 150 in the rankings but never quite making the big-time, could bring down the curtain alongside Federer in one of the most stunning venues in his sport?

As he explained to ATPWorldTour.com: “It was a great feeling, great match, great atmosphere on Stadium 2… It was really a great last match for me. Playing with Roger was really special.”

He went on to say that he had not planned for Indian Wells to be the last stop in his ‘retirement tour’, yet it had the feel of being just that.

Only last month, Federer also took a wild card to play with Lammer in his ‘second home’ tournament of Dubai. Just as here, they lost by the closest of margins in the first match, but Federer almost let the cat out of the bag when he talked about his rare venture into doubles in Dubai: the last time was in 2007 with another Swiss friend, Yves Allegro.

“Michael Lammer is one of the guys, my best friends, was one of my best friends on tour and in my life, and he’s a guy I have never played doubles with.

“So I really want to do that before he retires because he’s not far off. And we won the Davis Cup last year. I have played doubles with Marco, with Yves, with Stan, with most of those guys, but never with Michael other than back in the Junior Swiss Championships when we were 14, 16, 18. So we go way back. That’s why we are both excited about it.”

Federer neatly skipped over the fact that he is almost a year older than Lammer and shows no sign of retirement.

But perhaps the seeds of these final two doubles matches between the friends were sown in that Davis Cup victory for Switzerland. Lammer highlighted the emotional end to 2014 as the high-spot of his career:

“Obviously winning the Davis Cup last year was probably the biggest thing in my tennis career. To share it with Roger, Stan [Wawrinka], Marco [Chiudinelli] and captain Severin [Luthi] was an unbelievable feeling and something I will never forget. It’s obviously very special because two Grand Slam champions like this when Switzerland is a small country—I don’t know if we will ever experience that again.

“Davis Cup was always in my head. We know maybe one day we could go to the end with those champions. And now after all these years we achieved it, it’s an unbelievable feeling for all of us.”

Lucky to have many memorable moments in my career, especially winning @daviscup with my Swiss teammates last year pic.twitter.com/bW3Azedupv

Federer has been one of the longest-serving Davis Cup players on the tour, and one of its most prolific match-winners, in a commitment that began in 1999 and took in 26 ties. But as all the top players have said many times, it is hard to marry the demands of Davis Cup with going deep in the main-tour events.

Last year, though, Federer and Wawrinka made themselves available for all four ties, combining in the final to play three of the rubbers. And Federer made it abundantly clear, both then and since, that he wanted to win the Cup as much for his team-mates as himself.

Again in Dubai, when this correspondent asked how tough it was to bypass defence of the title this year, Federer was very clear: “No, it wasn’t a difficult decision. I have played for so long, and I think by winning it I can finally do whatever I please… I’m happy I was able to finally tick that off [though] I didn’t do it just for that. I totally did it for the boys more than for me, to be quite honest. I just really wanted Michael and Marco and Stan to get it because they deserve it. So for me this year it was very clear that I was not going to play anymore after this win…

“But I’m sorry for the team… They are all some of my best friends, so that was the tougher part of it, less the tennis itself.” 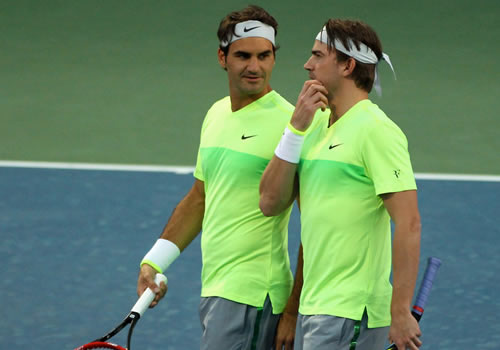 Because of course, both Federer and Wawrinka still have bigger fish to fry, still have ambitions for major titles and ranking points, but as Wawrinka said in Rotterdam, he too is approaching 30 and now has to be smart with his scheduling.

And so, without its two stars in the recent first round, Switzerland lost, making the tie against Belgium Lammer’s last Davis Cup appearance, too.

Happy timing, then—planned or not—and the deed was done with the minimum of fuss—very much the Swiss way—in a ‘thank-you’ Tweet:

Bittersweet to say that yesterday was my last match on @atpworldtour. Great to share it with my friend @rogerfederer pic.twitter.com/F33TqT1aD5

Lammer is staying in Indian Wells to soak up the sun, sit alongside Federer’s father in the player’s box, and enjoy his last week as a professional tennis player in some style.

“We are really old friends since we were 10 years old, practising together in juniors, sharing a flat… He’s just a really nice guy. We share a lot of things. It’s really unbelievable what he achieved in tennis but to me he is just a great person and really close friend.

“I’m still here, staying with Roger. Looking forward to a nice tournament and hopefully for Roger to go to the end.”

Now that would surely be the cherry on Lammer’s birthday cake come Tuesday.