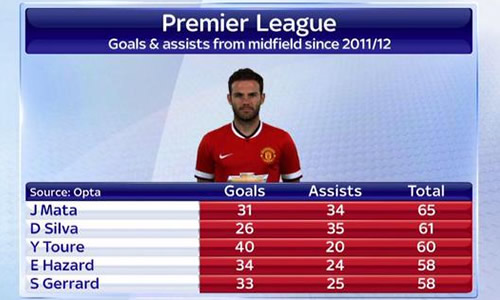 Juan Mata has been in impressive form for Manchester United in recent weeks – and now the Spaniard has the statistics to back him up.

Mata scored both goals in a sparkling display for the Red Devils as Louis van Gaal’s side ran out 2-1 winners at Liverpool in their most recent Premier League outing.

The 26-year-old has scored seven goals and made three assists in 25 Premier League games for United so far this season.

And Mata, who moved to United from Chelsea back in January 2014, has been the Premier League’s top performing midfielder in terms of goals and assists since his arrival at Stamford Bridge from Valencia in the summer of 2011.

The Spain international has scored 31 goals and notched up 34 assists in the English top flight since his move to England to join the Blues.